Now that I have been working out, I have found that keeping the bad where its supposed to be and keeping it secure is a bit of an issue. There are a boat load of belts and other systems to keep your bag in place and I have used a few of them but I also know of a few others. Note: This is not about the Hollister/Coloplast/Whoever belts that hook to your wafer. Heres the run down on ostomy belts:
Stealth Belt – http://stealthbelt.com/

This is one of the first belts I found when I first had surgery and I was on the hunt to cover this stupid thing up. I have read a few reviews of the stealth belt and there are many people who say its a total bad ass. From their website I’m pretty sure that you can customize the size/pattern and they are waterproof for swimming. But I have never actually tried a stealth belt because they are expensive as all get out. Starting at around $80, I have found MANY other options that I think are just as good. Now if you’ve got a permanent ileo, maybe this is a good option because you WILL get your use out of it. For me, and the other temporary people. Meh, I’ve had better.
Phoenix Ostomy Belt – http://www.ostomysupportsystem.com/product.html

I heard SO many people talking about this belt when I first got my ostomy and started looking for ostomy belts. It seemed to be the perfect one for me, because I wear my ostomy bag sideways. I found a REALLY amazing guy online who had two that he offered to send me for FREE. Starting at $50,  a free belt was the perfect price. So I got them shortly after my first surgery and much to my chagrin, they were to small because I was too fat. Boo. So…I found out, through edgepark.com they sell these and I got to bill it to my insurance company. BONUS. So months later I got my belt. Now call me a dummy, but I found this thing seriously complicated to put in. I found it bulky after it was on, and more than complicated to get it set and in order. Again, for $50 its a good idea, but I have and can find BETTER systems for much cheaper. Not to mention if you buy this one or the stealth belt, you’re going to have one, MAYBE two? We all know that you can and will get poop on them, so having multiples is a definite perk. When things are $50 and up, getting more than 2 gets really complicated. In fact, I think I’ve got a large and possibly a medium I’d be willing to send to someone else because it sucks so bad. Maybe you will like this belt.
There are a lot of other “knock off” Phoenix belts, they all basically do the same thing. They all look complicated and they are all expensive.
Protective Ostomy Belt – http://www.ostomycares.com/index_en.php?ostomy=2010023

I also have not worn this belt. Heres why. I wear my belt sideways (which I TOTALLY recommend) This belt is really long. I wanted something much smaller. I also feel like when you’re wearing pants with belts similar to this one, they are just going to get bunched up and move and will defeat the purpose. If you’ve tried one like this, or the ones over at Ostomy Secrets let me know if they work for you.
Belts That Actually Work
Here is what I have learned. Most clothes, underwear, pouch covers, belts and bands made FOR people with ostomies are totally impractical. Granted most of them are actually made by people with ostomies but often times I think there is a disconnect. They are also very short runs of almost all of the garments so they are really, really pricey. So this is what I do because I’m broke and I also think that these solutions are not as simple/practical as I’d like.
Two Words: Tube Tops or Belly Bands

Now for all you dudes outs there, I get that the idea of wearing a tube top is weird but whatevs, you wear your poop around in a bag, get over it. The tube tops that work the best are often times the cheapest ones. The ones that are specifically the bandeau are the right size to cover my bag sideways, and they also come off and go on really easily. They come in about a billion different colors, and most often are one size fits all, which is actually pretty great. Even if they are sized I’d say go small, because they stretch out and the whole point of it is to keep the bag close to your body. Tighter the better. These actually lay flat to your body, keep the bag flat, and have no stupid buttons, snaps, velcro, or do-dads. The one in the picture, I just ordered from Amazon for $5.50. I haven’t tested it yet but you can always get cheapo clearance bandeau tube tops. That seller on Amazon, has about 1000 colors and combines shipping prices. 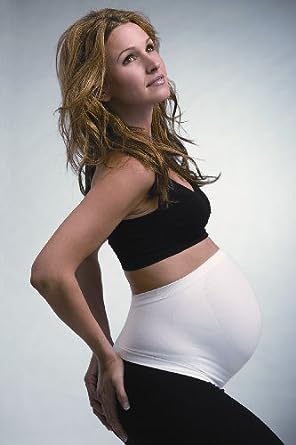 The other thing I have used are pregnancy belly bands. I have a few that have lace along the bottom so they can stick out of the bottom of my shirts and look like just a layering shirt. Its actually kinda cute. The other thing I like about these is that if i fold them in half I get double the support when I’m running or something else in the gym. I have bought a few of these in the past (the cute ones) for like $12/ea. Again buy smaller, they stretch out and mine are a bit bigger than I’d prefer.
I’ve also talked about how maternity jeans got me through my fat days and post surgery days. I still stand by that. But obviously those wont provide support in times where you’re working out or doing heavier activity.
What I like about these bands/tube tops is that when you want them there, they willbe and when you have to empty your bag or move them its simple, you just lift them up. The other belts are all complicated. You can also have 10 of these if you want for the price of just one of those other belts. I personally think these are much better choices.
What do you use, if anything? Any great workout secrets for keeping the bag in place?


UPDATE 1.15.11 –  I got my tube tops from amazon the other day. I ordered black and tan and they are AWESOME. They are tighter than I had expected but thats good it keeps everything in place. I’m gonna go work out in one right now!! I’ve also found that having a tube top on it, helps with leaks too. It doesn’t totally protect you but it gives you at least one last line of defense from getting all over your clothes.