I'm so over this colon.

This is not me. But this picture is ridiculous

I’m so over this colon. Its like a pair of jeans that I’ve had forever that I refuse to get rid of. They were great and useful, but now they have a ton of holes in them. But for some reason, I’m hesitant to throw them out. Granted throwing out my favorite denim is a tad different than removing my colon, but you know, same principal. With all the problems and discomfort that I get from this dang thing, you’d think that I’d be more than jumping at the bit to get rid of it. But I’m not. I’m not at all. I’m more than pumped about the possibility of getting rid of it and feeling healthy and maybe getting part of my life back, but the road to get there just seems so daunting. It feels endless. Not only does it feel endless but the road has a damn colostomy bag involved with it. The road is gross. The road is filled with potential problems and questions and uncertainty.
Can you tell I like metaphors?
I have been pondering this surgery for a few weeks now and in that time I have talked to a few nurses and asked a few people at various stages in their surgeries a barrage of questions. I’m pretty sure my last Q and A session ended with “Did you wake up with a butt tube?” So I’m not afraid to ask questions, but am I a little afraid of some of the answers? Affirmative.  I have not taken this whole thing lightly and in fact was dead set against it until a few weeks ago when I traveled to Cleveland Clinic and talked to a specialist there who essentially told me that surgery may very well be my only option left. But it is still just that…and option. Its not my last resort and with that in some sick way I was comforted. I still have an option. I still get to make the choice and living with UC has given me so few choices. However, now that I do look at this like a choice…I think about it CONSTANTLY. Every time my stomach grumbles, I think about chopping out the ‘ol colon. Every time I sit on the toilet. Every time I second guess eating something. Every time I worry about the location of a bathroom. Every time I am humiliated in one way or another by this disease….I think I need this surgery.
Much like many people out there who are in my diseased bowel shoes, the surgery sounds like a god send. It sounds like an answer to all of our problems, aside from one thing. The one thing that makes me and I’m sure others second guess the WHOLE thing. The one thing that makes me consider living like this for the rest of my life because I can’t even fathom it. You know what I’m talking about. I swear I could just not even say it and we’d all be on the same damn page. But for those of you who are reading this with your head cocked to the side in confusion….its the colostomy bag. Yea, that thing. That super gross thing that makes us all feel disgusting and subhuman. It terrifies me. Its ugly, its stuck to you, and its def a damper for intimacy. I mean seriously, I know people get around it, but how? How do you even think about sex with that thing attached to you.
Yea I said it.
I think I’d probably swear off sex for the entirety of stage one of my surgeries. I cannot imagine living like that permanently.
Yea, I said that too.
I’m not one for sugar coating. I still don’t know what I’ll do just yet. I still have some tests to run and a few more visits with my doctor…but…its looking like I may be facing my fears here in the next few months. 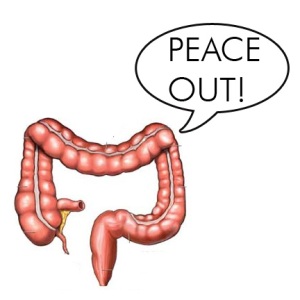 You know, through all of this, since the very beginning of diagnosis I have told myself it can’t get any worse. And without fail, every single time, it has gotten worse. I have had the most ridiculous UC journey, that if it wasn’t me, I might point and laugh. (Eh maybe not, but I would probably talk about me behind my back). It almost seems fitting that I go out with a bang. That this redonkulous ride called UC would end with the removal of a large organ and the attachment of a colostomy bag.